Brasserie LeFort is a name from Belgium’s early 20th-century brewing history.  It was a small brewery located in the city of Kortrijk, in the south of West Flanders, right down near the French border.

It was the city brewery from 1854 to 1911, at which time the owner of the brewery died.  The brewery passed to his eldest daughter, who had recently married Omer Vander Ghinste; the owner of a small brewery in Bellegem.  So it was at this time all brewing activities were moved to the Bellegem brewery, significantly increasing its activity.

In 2016 this beer was created, and immediately found recognition by way of awards.  The most significant of which were being awarded a gold medal at the World Beer Awards 2018, just after being name World’s Best Tripel at the 2018 Beer World Cup.

It’s a very good tripel, quite fruity with a biscuit malt body.  A solid hop bitterness develops, with a spicy, lingering bitterness. 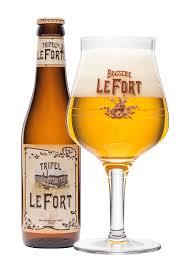