The brewery was started by Omer Vander Ghinste in 1892, and as was tradition, gave the beers his own name.  He advertised his beer with stained glass windows stating ‘Bieren Omer Vander Ghinste’ at the front of bars serving his beer.

Too expensive to change these windows, as control of the brewery was ceded to the next generation, the first-born son was also named Omer.

Now the fifth generation ‘Omer’ is in charge of running the brewery, which changed its name to ‘Bockor’ back in 1977.

The beer is a glowing golden colour, with a perfect white head.  The aroma is a mix of lemon, honey, pear, white pepper, floral grassy hops and earthy yeast.

The citrus is present in the flavour, mixing with the hop bitterness.  Light malts (from the Loire valley in France) and three aromatic hops give the beer a crisp and fresh mouthfeel.

There is a pleasant spicy, earthy bitterness that lingers in the aftertaste.  This traditional blond beer has been brewed to basically the same recipe, by the family for more than 120 years. 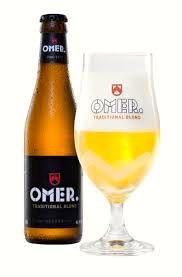