After a conversation with one of our local beer club members, it emerged that we’ve never had Delirium Tremens in our packs.  We have had the Nocturnum, the festive Noel, and the celebratory Argentum.  But not the beer where the legendary pink elephants started.

The brewery was founded by Leon Huyghe in 1906, but there had been an operating brewery on the site since 1654.  So there is a fair bit of heritage to this brewery.

It wasn’t until December 26th 1988 that the Delirium label was introduced to the world.  The Tremens was a blonde tripel, utilizing three different yeasts in a tripel fermentation process.

The beer immediately gathered a strong international fan base.  Ten years later it was acclaimed as the ‘Best Beer in the World’ at the 1998 World Beer Championships in Chicago.

But it wasn’t always plain sailing.  When it was first exported to the US, it was recalled from shelves, falling foul of the legislation banning products which ‘encouraged excess drinking’.  For a while, they renamed the beer ‘Mateen Tripel’ just for the US!

Tasting notes:  it’s delicious!  Go on, see for yourself.

See all of the January 2017 monthly six pack 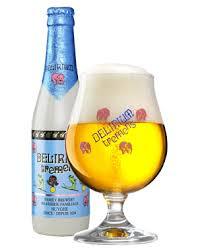