The Vicaris Tripel is an uncomplicated beer – using just two different hops and one type of malt.  And maybe with good reason; it was the first beer produced commercially by this small family brewery in the East Flanders town of Dendermonde.

Of course the story has humble beginnings, with founder Vincent Dilewyns starting out as a home brewer, with no intention of selling commercially.  A larger batch was produced under license for inclusion in an exhibition on the history of brewing in Grembergen.

The excess was sold to locals, and some of the beer found its way into a degustation for the Zythos beer association.  Dilewyns was invited to show his beer at the next Zythos festival in 2006, and the Tripel won the consumers choice award.   Time to brew commercially!

It seems a malt-forward beer, with less of the fruit aroma normally associated with tripels.  There is an early sweetness, but the beer really dries out quickly mid palette.  The spicing adds a pleasant prickly finish to the lingering bitterness. 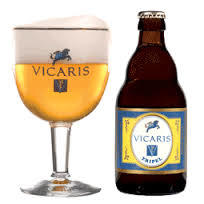