't Pakhuis is a small brew pub in the old part of Antwerp’s city centre, that I’ve had the pleasure of visiting a couple of times.  It was here, quite a few years ago, that I was introduced to the ‘t Pakhuis beers, which were previously only available at the venue but have since been made available for wider distribution.

Now when I had this beer from the tap, I had remembered it more as a hoppy Strong Blond Ale, but as you can see from the labels the brewery has called this a tripel.

This is the premier beer of the brewery, and the name comes from a comment by a beer expert invited to the opening of the brewery.  He noted ‘Da’s een bangelijke goei pint’, which translates from Antwerp dialect to ‘this is an amazing pint!’.  The beer name stuck.

It starts with a malt sweetness, with hints of summer fruits and something floral.  Mid-palate the hops kick in as I remembered, growing toward the finish.  The aftertaste is of earthy spices and that lingering tingly hop bitterness. 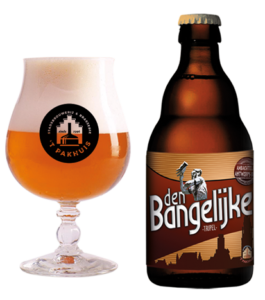