Oud Beersel was traditionally one of Belgium’s old lambic brewery, having commenced back in 1882.  It was passed through several generations of the family until 2002 when financial issues led to the brewery ceasing operations.

In 2005, two beer-loving Belgian’s decided to kick things off again.  Now starting a lambic brewery requires patience – and cash – while you wait the 3 or more years for the lambic to age.  So it was that two non-lambic beers were produced to generate some cashflow.

Of course this Bersalis Tripel is one of those beers.  Less obvious is that this beer is actually made at Brouwerij Huyghe (famous for the Delirium beers).

The aroma is typically Belgian, with those yeast characters of banana and clove, with a hint of herbal spice.

The flavour is as expected for a Belgian Tripel – a slightly sweet malt body, a little bready with white stone fruits, candi sugar or even honey, cloves again and in behind are those spicy yeast characters which, along with the hops, do their job of balancing out the sweetness to make this beer really drinkable. 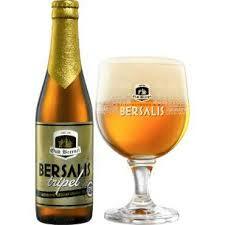