The Affligem brewery has a long and interesting history.  Recognised as an official Abbey brewery, the abbey credits is establishment to 6 knights way back in 1074 (hence the embossing on the bottles).

Through the centuries, various wars have seen the Affligem Abbey Brewery close its doors no fewer than 5 times.  The last time was in 1941 during the Second World War.  It was only in 1956 that a commercial deal was signed to pass the brewing secrets of Affligem Abbey to a commercial brewery.

It has a light malt body, with inviting sweetness of tropical fruits, giving way to a peppery spice and strong and dry, bitter finish.  And the beer hides itsalcohol all too well!

See all of the May 2016 monthly six pack 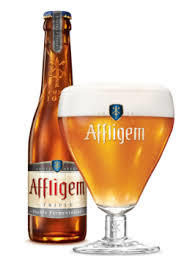