When we first started visiting Belgium, the De Koninck Tripel was one of our favourite beers.  It was a readily available offering that easily pleased.  Then in the late 2000’s they stopped making this beer.

The tripel was reintroduced in 2010 under this name, which basically translates to the ‘Tripel of Antwerp’.   As we’ve said before, tripels are Belgium’s equivalent of the Pale Ale in Australia.  It is basically the first beer most breweries will make (with varying degrees of success – just like our Pale Ales!) so to announce this beer as THE tripel of Antwerp is a bold claim.

It pours a lovely golden colour, and has that unmistakable Belgian yeast character floating up through the foamy white head.

On tasting, there is the nice mix of pale and caramel malts for a solid, if slightly sweet, malt backbone.  Saaz hops provide the bitterness and lift the mouthfeel of the beer away from the sweetness.  Very easy to drink for the ABV, imagine sitting by the cathedral in Antwerp’s Old Town square, and take in the taste of the city. 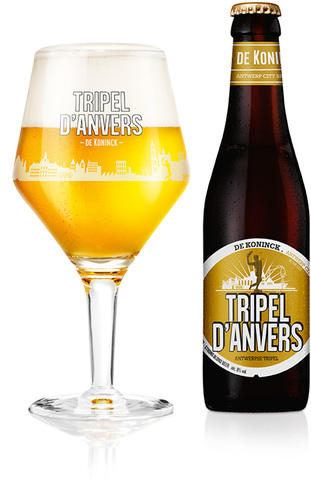