Het Kapittal ABT is a tripel from Brouwerij Van Eecke.  It is a hazy orange copper colour, and has a thick rocky white head which lasts and lasts. The aroma is an enticing mix of bready malts, sweet fruits and soft spices.

The taste is both sweet and a little spicy, showing good balance. The sugary fruits come through, with the solid malt backbone. There is a spicy tingle with a little alcohol warmth, making the finish smooth and pleasant.

This is a good solid tripel, with all the right traits. Undoubtedly the hero is the yeast, which heavily weighs in on the aroma and flavour. This is a very drinkable beer, despite the hefty alcohol volume.

What is an ABT?  The term 'ABT' is the Dutch word for Abbot.  He was the leader of the chapter ('kapittel' in Dutch), the head of the abbey.  For breweries with an association to a religious order, traditionally the highest strength beer in a brewery range is called an ABT.

See all of the June 2013 monthly six pack 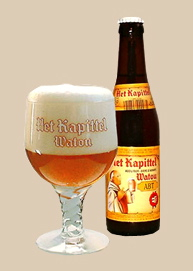