De Molen aim to release a collaborative brew once every 4 weeks, and they do a pretty good job of fulfilling this intention.  For this collab they ventured a little further afield (metaphorically speaking) for a brewing partner and found Reketye Brewery from Hungary.

It must always be an interesting discussion between the brewers when they discuss the joint project and settle on a beer style.  No prizes for guessing the smoked malt was De Molen’s choice, and the smoked paprika powder chosen by the Hungarian brewers.

And it is a pretty interesting ingredient to include in a beer.  I don’t honestly think I’ve ever had another paprika beer before.  I mean, who would do that?

As always, the smoked beer will probably be either a love or hate job.  The smoked malts add a real bacon aroma to the beer.  In the flavour it comes through more as smoked darker meat.  The dopplebock has that lovely sweet malt body, with just a little hint of hop bitterness and spice.  The paprika takes a back seat, and I doubt I’d pick it as such without knowing it is in the beer.

And in true German style, the dopplebock name must end in ‘ator’! 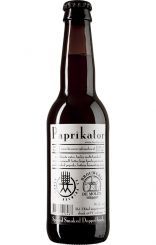