This is essentially a strong bock (lager) beer, or Dopplebock style.  And its made using at least 50% wheat malt (which is a requirement by German law for using the name Weizenbier).

And there is a fascinating naming convention for German Dopplebocks that means most end in ‘ator’.  The name comes from the Paulaner monks of who brewed the very first dopplebock.  They were allowed to drink beer during their time of fasting, so decided to brew a stronger beer with more body to help get through the fast.

The beer will pour very still, but wait a few seconds and a Guinness-like settling will create a small head.  There is a sweet malty body, hints of banana and pear, bready malt and a little wood character.  The hops jump in as well and give a nice prickle to mouthfeel and break up the sticky mouth character.

A really interesting beer that will take a few sips to get your head around, but a beer that I’m sure you’ll ultimately enjoy. 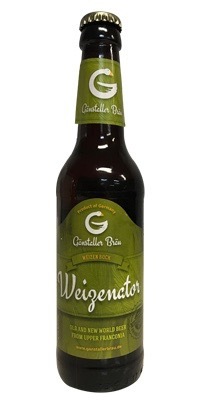 An unfiltered pale lager, dry-hopped with Comet and Mandarina Bavaria hops for a fruity hop character