John Martin was an English brewer who took up residence in Antwerp in 1909.  His grandson Anthony is now the owner of the business.

Although he set up in Belgium, John Martin’s beers were very much in the British style.  He first brewed a pale ale, and his second beer was the IPA.

The hop-lovers will probably be disappointed in this beer as an IPA.   Even viewed as an English style IPA, it lacks the assertive hop bitterness and aroma we’ve become used to for IPA’s.

But taste it without the IPA-expectation, and you get a well balanced, malty ale with a background hop presence.  A solid biscuity malt base, with light fruity hints and a little lingering, spicy bitterness. 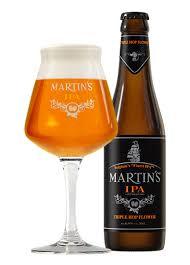