This beer from De Molen was brewed for their Broeft festival, held annually in late September.  And from all reports, this was a favourite among the crowd as well as the De Molen brewery crew.

It is an Imperial IPA, brewed in the ‘North-East’ style that has become so popular (though there doesn’t seem to be the need to create such a turbid mess as some NEIPA’s I’ve seen produced locally).

Cryo hops are used – 21 grams per litre in fact.  Cryo hops are the concentrated lupulin from whole leaf hops, which contain the resins and aromatic oils that are the hero of this style of beer.

The smell is dank and resinous tropical fruits.  An inviting fruit sweetness at the start, with a little hop bitterness than melds with a little tartness like green apples.  The bitter fades, and the luscious sweet fruits and malts dominate, without ever getting to sweet.  And just try and find the 9% ABV in this beer; it is dangerously drinkable.

A bit of history:  De Molen first made 21 Grams back in 2014, then usurped it with 25 Grams in 2015.  But we are back to the original nummber, which is inspired by the idea that the body loses 21 grams of weight when we die, as our souls leave our bodies!

See all of the January 2018 monthly six pack 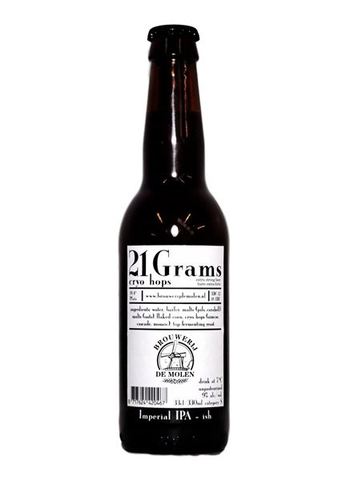