In medieval Ghent 'gruuts' were Flemish coins used by brewers to pay taxes on the richness of their brews. The term 'gruut' is also used to describe a mixture of herbs which were added to beer in place of hops. It is such a brewing process which produces the Gruut Blond.

It is a cloudy golden, gently barley’d ale with a thin fluffy white head which disappears slowly. The aroma is of citrus, herbs and summer fruits, as well as aromatic grains.

The taste is moderately sweet, but there is a tinge of bitterness from the special selection of herbs substituting for the hops. The palate is smooth and full. Nothing dominates, but rather the combination of summer fruits, grains and herbs somehow sticks to the tongue; with a pleasant lingering aftertaste. 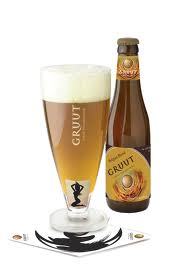 Brewed without hops, using a mixture of herbs and spice; one of the best 'gruit' style beers you'll taste