Brasserie La Binchoise is a small brewery located in the city of Binche, in the southern Belgian province of Hainaut.  Having a history dating back to the 1830’s, the brewery in its current incarnation started in 2001 when four friends formed a company to take over the brewery from the previous owners.

Binche is known as a carnival city, with the locals dressing as clown-like characters and parading through the streets to celebrate mardi gras.  And this is the local beer of choice with which to celebrate.

The blond is one of the original beers from the previous brewer.  It fits somewhere in between a traditional Belgian blond and a witbier.  With the heavier body from just the Belgian Pale Malt, it also has the addition of orange peel and coriander which are normally associated with a Belgian Witbier.

The mix makes for a tasty beer, slightly cloudy on the pour with a firm earthy bitterness from the use of Belgian Styrian Golding, Hallertau, Northern Brewer and Challenger hops. 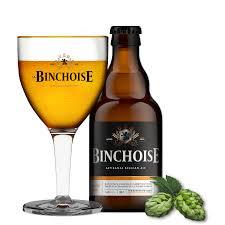