Leffe is not the sort of beer we'd normally look to bring in.  We appreciate the artisanal producers - not a term you'd apply to a brewing facility which occupies a whole city block.  And that's just one location of many!  But we do like to offer up unusual or less-common beers, and hence the Leffe Royale found its way onto our shipment.

Leffe Royale is a blond ale, in the style of the iconic Leffe Blond.  It has a dark golden body, capped by a foaming white head.  The beer has an inviting aroma of sweet malt, clove and typical Belgian yeast characters.  Not too dissimilar to the normal Blond.

The flavour is where things step up a bit.  A more rounded mouthfeel, with a slight but noticeable extra hop bitterness.  Cloves are noticeable, maybe a hint of honey and vanilla, as well as a little peppery bite.  Despite the full flavour and sweetness, the beer does round out with a dry, lingering aftertaste.

It is an interesting beer from Leffe, said to use three different type of hops.

Undoubtedly a hint toward the growing popularity of hoppy beers.  From the presentation of the bottle, to the flavour of the beer, this is a step up in class on the original Blond.  And the new glass designed specially for this beer is pretty sexy too! 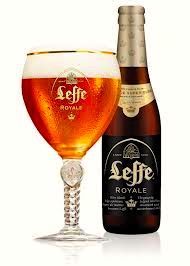