Noblesse was the first beer to be produced by brewer Ronald at his lovely small brewery De Dochter van de Korenaar.

It is a blond ale with an inviting copper-orange body, supporting a foamy white head. The aroma is of crisp light malts and soft earthy hops with a hint of summer fruits in the Belgian yeast.

The beer is well balanced in the taste.  Sweetness from the bready malts backed by a slight fruity touch offsets the pleasant hop bite with a little spice note.  The beer represents the growing tendency of Belgian brewers to utilise an increasing amount of hops.  A good level of carbonation leads to a crisp mouthfeel as the beer finishes bone dry, with a lovely layered bitter aftertaste.

Availability : Limited in 330ml bottles only. 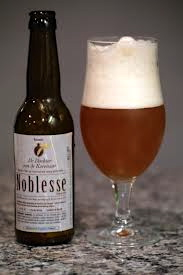