The name of this beer translates as ‘far & wide’, though the style has its origins not that far away.  It is an English Strong Ale, a style we don’t see that often; at least this far away from the source.

The style has been described as being ‘bigger than a pale ale, smaller than a barley wine’.  And we are referring to English styles here, so nothing too hoppy or bitter, the hero is the malt.

On the pour, this beer seems quite still.  But a small head will gently form over the bronze coloured body.  The aroma is of heavy malt giving sweet fruity notes.

The flavour follows with a big dose of caramel malt sweetness at the start.  The heavy body coats the tongue with a pleasant syrupy fruitiness, with hints of orange marmalade, dried fruits, rosewater and toffee.

It stops just short of being cloying, with a hint of hop bitterness and prickle from the carbonation almost coming in as an afterthought.  A beer to sip and enjoy, this would be cracking to have with Christmas cake or pudding. 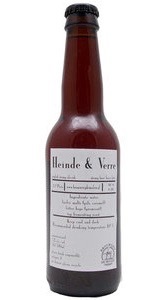