If you google ‘Kaapse Maria’ chances are you’ll end up on a page for a small beer and wine bar/café in Rotterdam.  And that’s fair enough – it is a cool little café just off the beaten path in Rotterdam, specializing in craft beer and organic wines.

The bar boasts 25 taps of both local and international beer.  And their house beer is none other than Kaapse Brouwers Maria Vermont Pale Ale.

It is the first time I’ve had a pale ale in this style, so can only really compare it to the NEIPA’s that are flooding the market both here and abroad.  It pours a suitably hazy, slightly dull straw colour, with enough aromatic hops for a pleasant fruity flavour.

As you’d expect, the bitterness is quite muted, with just a little upfront that disappears as the beer progresses.  A slightly sweet malt body, more of that tropical fruit juice flavour and just enough bitterness to dry things out.

Such an easy beer to drink, so don’t leave this one sitting too long in your beer fridge.  It is ready to go!

Have I had this beer before?  You may well have tried a beer of the same name, but this is a completely different recipe to the wood-infused pale ale. 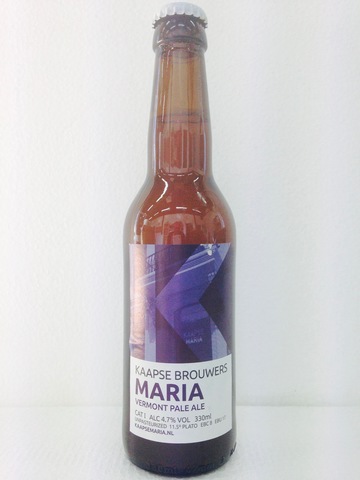