Another beer from our new Spanish brewery, La Calavera.  Not really what they are known for – they are much more about the barrel aged, fruited and Brettanomyces beers, but I’m happy to have this IPA in the beer packs.

I enjoyed having a properly bitter beer, it makes a nice change from all the oat cream, lactose, low (no) bitterness hazies that seem to dominate lately.  There’s nothing wrong with that style of beer in its own right, I’ve just been missing the old style West Coast IPA bitterness.

And this beer has it.  Styled as an American IPA, it pretty much delivers on the promise.

The aroma is actually quite subdued, with some sweet malt and very general fruity notes.  If pressed I’d probably best describe it as lemon rind.  The flavour is of bready malt with some stone fruits.  Not really lemon to be fair, maybe a hint of tart grapefruit and dried apricots.

The bitterness grips the side of your tongue, filling your cheeks as the beer disappears.  But that lovely bitterness lingers long in the aftertaste, with just a little warming alcohol feel to finish. 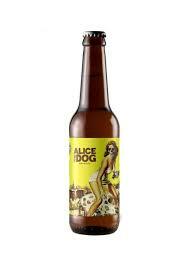