It has been a while since we've had a beer from the good 'Dochter', so I was pleased when I saw that this new beer from them was available late last year.

I think DVDK beers are some of the most underated beers we bring in.  They don't have flashy labels or budget for marketing spins.  But they are almost always excellent beers, not necessarily fitting into an established beer style box, brewed by a seriously nice fellow who is held in very high esteem by his brewing peers.

So here we have Claire, a dry-hopped lager.  Now lagers aren't generally the darlings of the craft beer world, but they are a very good test of a brewers skills.    And I really like this beer.

It pours quite dark for a traditional lager, and is slightly cloudy - especially if you pour in the sediment from the bottom of the bottle!  The aroma is strongly of malt with a herbal grassy note.  The flavour is sweet on the front palate, though the hop bitterness lifts the mouthfeel.  It has an earthy quality that comes through late with the bitterness growing quite obviously in the lingering finish.

I'm sure for most of us a lager isn't the type of beer that we'd naturally reach for, given the array of beers we have to hand.  But this beer is interesting enough to want another, simple yet very drinkable.  If I was at a function and this was the beer of choice I reckon I could quite happily enjoy this all afternoon. 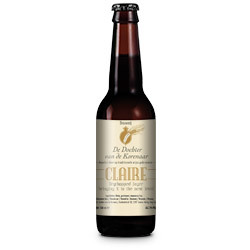 Not For Sale Craft Lager

by Not For Sale Ale (brewed by Brouwerij De Molen)

This dry-hopped lager is the symbol of a very worthwhile charity raising awareness and support to fight forced labour, exploitation and human trafficking around the world