Another beer from Ronald at De Dochter van de Korenaar brewery, in the Belgian enclave of Baarle-Hertog; a Belgian island in a sea of Dutch territory.  This is his Belgian (India) Pale Ale - Belle-Fleur.

It pours a slightly cloudy orange colour, with a foaming white head.  These beers are fresh and alive!   The smell is an inviting combination of pale malt, citrus, grapefruit and pine needles.

There is just a little sweetness before the hops arrive, and they do so in a well-balanced way.  Grapefruit and lemony citrus, grassy pine notes and a peppery spice tingle make for a delicious character.  A lively natural carbonation sharpens the flavours on the palette.  The earthy hops leave a long and pleasant bitter finish, inviting you back for more.

About the Style:  Belgian IPA's are, by their nature, softer and more subtle than the IPA's we have become used to from Australian or US brewers.  Some people might align this beer more closely to an American Pale Ale.  The style is a relatively new one for Belgian brewers, driven by the US market. 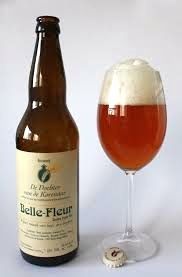