This beer was originally brewed as a collaboration between Uiltje, De Moersleutel and Lehe Pruulikoda (a craft brewery from Estonia).  It proved quite popular, so Uiltje decided to brew a second batch.

And we are pretty happy that they did!

The beer has a malt bill consisting of Pilsner barley malt, wheat and flaked oats.  This gives the base for the soft, pillowy mouthfeel common to the hazy or NEIPA style beers.  A massive dose of Mosaic hops is complimented by some Citra and Loral for the tropical fruits notes of pineapple, mango, orange.

London Fog is the yeast of choice for these hazy styles, which is said to leave some residual sweetness to the beer as well as adding that smooth mouthfeel.

The end result is a beer which pretty much does as it should.  Fresh, fruity, smooth and dangerously drinkable for the ABV.  Uiltje would like you to drink this within 3 months (though the BB is longer of course).  We’ve just about made that happen.

See all of the October 2020 monthly six pack 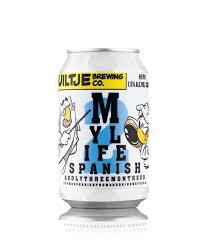