We went for a road trip through Victoria and out to South Australia last year, taking in the Barossa Valley of course.  A stop to check out the local brewery, and a few conversations later, we ended up distributing beer for this brewery throughout NSW and Queensland.

For the past couple of years at hop harvest time, the BVB team head to the local Hills Hop Farm to pick hops for a wet hop beer. The brewing team stayed at the brewery this time to commence the brew, while others including family members harvested around 60kgs of cascade hop cones and rushed them back to the brewery. An hour after the picking finished, the hops were in the fermenter!

The end product is the Hazy Heaven NEIPA.  Tropical fruit aromas burst from the glass, with tangerine, orange and passionfruit at the fore.  There is a fruity sweetness to the beer with a fairly low level of bitterness. It makes for a really easy drinking, well balanced and tasty hazy IPA that belies its ABV. 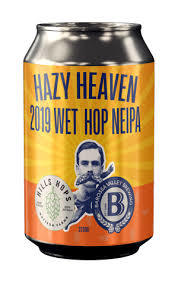