Brussels Beer Project are no longer the new kids on the (Brussels) block, having been around since 2013.  But they are still operating in a different way to most Belgian breweries.

With their small brewery and tap room in the centre of Brussels, they get many of their beers brewed at the Proef Brewery near Ghent.  They also make a point of doing collaborations with an assortment of brewers.

This beer started life as a collaboration with Weird Beard from the UK.  Originally it was a bit higher in ABV, and with a different yeast.  BBP have changed this beer since then to make it their own – in cans, too!

Lots of tropical fruit aroma and flavour with pineapple, mango, citrus and floral character from the Simcoe, Mosaic, Nelson Sauvin and Citra hops.

The addition of oat flakes add a little softness to the body, but there is still a reasonable amount of bitterness to this beer (too much to be a NEIPA for me!), that lingers with the fruity character in the aftertaste. 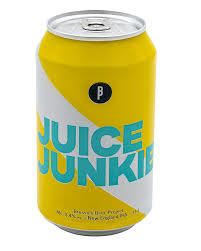