Most Belgian beer fans will be familiar with the classic Duvel beer.  Originally brewed to celebrate the end of WWI, it was released with the name ‘Victory Ale’ but was described as ‘a real devil of a beer’ and the new name stuck.

This new beer from Duvel-Moortgat is released to celebrate 150 years of the brewery, and really looks to play on the devil links with the ABV set at 6.66%.  (The brewery insists that while a small variance is allowed, each batch is tested to ensure it is at 6.66%!)

So, what is this new devil?  It’s a Belgian Blond that uses the same malt varieties as the original Duvel as well as the Duvel yeast.  The bigger difference is in the hops, with 4 additional hops – plus dry-hopping – added to the traditional Styrian Goldings and Saaz hops of the original.

The result is a slightly hazy blonde beer with high carbonation and a yeasty aroma of banana and citrus.  There is a citrus and fruit sweetness up front, giving in to more bitterness as the beer progresses.  There is a nice citrus and spice lingering bitterness.

The brewery says this beer is aimed at the younger market who are apparently more intimidated by the higher ABV beers.  I guess this is Duvel’s equivalent of a session beer then!

See all of the September 2021 monthly six pack 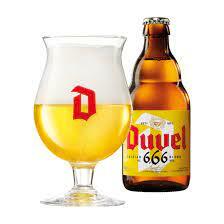