Maredsous is an abbey found in the town of Denee near to Namur, which is a little to the south east of Belgium’s geographical centre. The abbey has been around since 1892, and in 1963 they licensed the name to the Duvel Moortgat brewery to produce these abbey ales.

The beer made under the Maredsous label are classically Belgian in style, with a Belgian Pale, Blond, Brune and Tripel.   The Brune 8 was originally produced as a Christmas beer, but found such favour that it was quickly made part of the core line up.

The dark ruby body offers aromas of caramel, cherries, plums, dried fruits and typical Belgian yeast character.  There is an inviting sweetness full of caramel malt, that sweet fruitiness of dried dark fruits, plum, apricot, a hint of chocolate with a bit of a spicy bite thrown in.

There is a little citrus in the aftertaste which balances out the sweetness of the malt and fruity aftertaste for a nicely balanced finish. 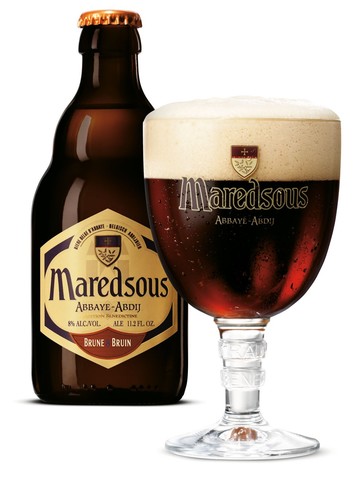