We’ve undoubtedly been a little slow to the party, but finally we have our first canned beer in our packs.  Of course it is an American IPA.

Caldera Brewing Company is based in Oregon, which is something of a home state to US craft brewing.  As of 31 Dec 2016, Portland had 70 breweries, rising to 105 if you include the metro areas of the city.  Caldera’s Ashland brewery is about 4.5 hours drive to the south.

They commenced brewing operations in 1997, and their success required a move to much bigger premises in 2010.  They were the first west coast brewer to can their own beers.  And their current facility cans over 1200 cans per minute!

Their IPA is one of the flagship beers produced year round.  Naturally it includes a good mix of fruity aromatic American hops with Citra, Simcoe, Centennial and Amarillo.  Despite this lupuline smorgasbord, the beer is nicely balanced with a solid malt backbone tempering the bitterness.

Never mind the influx of XPA’s popping up now – I could happily session these all afternoon!

See all of the May 2017 monthly six pack 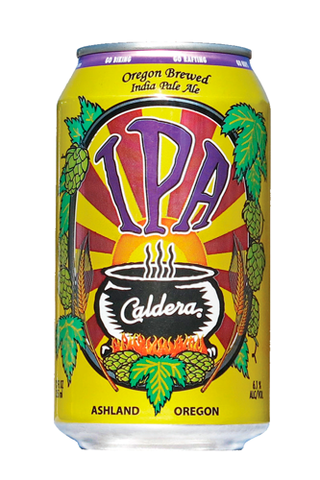