This brewery hails from the city of San Leandro in California, so is the first true west coast IPA to feature in our beer packs.

The brewery began operations back in 1989, so was a part of the early US craft beer movement on the west coast.  At the time, the brewery was a keg-only wholesale operation.  But over time, developed into a full production facility complete with tap room and barrel aging programmes.

At first the brewery created English style beers, heavy on the malt and the earthier old world hops.  But over time the styles changed to adopt the growing selection of Pacific Northwest hops.

The IPA is now the quintessential US beer.  Drake’s has a lovely copper Munich and Crystal malt body, balanced by generous additions of three C-hops – Centennial, Chinook and Cascade.  Lots of fresh tropical fruit and dank resinous hops lead the flavour assault for this beer, which won a Bronze award at the 2004 World Beer Cup.

See all of the July 2016 monthly six pack 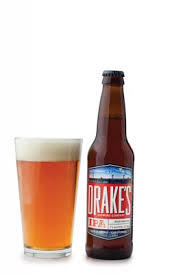