Brew By Numbers is one of London’s early wave of craft breweries.  Established in December 2012, they took up residence in a railway arch under the above ground train line between London Bridge and Bermondsey.  They are one of the oringinal breweries in the famed Bermondsey Beer Mile.

The beers have a rather unique naming convention.  The first number represents the style of the beer while the second number indicates the version of that beer style.  So our Porter here is the third distinct style of beer the boys brewed, and this particular recipe is the fifth different version of a porter they’ve done.

This beer is an American style porter featuring Willamette and Centennial hops.  It has the classic porter characteristics of dry roasted malt with hints of chocolate smoothing the mouthfeel, coupled with a definite hop character of fruity, grassy bitterness leaving the beer to finish quite dry with a lingering bite. 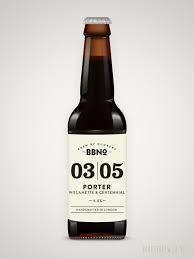