Brew By Numbers create lots of different beers, both in terms of different styles and different versions of those styles.  Their clever number/naming system is perfect for a group of such creatives.

So we come to expect regular new varieties of traditional styles, which is great, both as an importer and a consumer.  But sometimes they go back to a good old original.

The 03/03 version of the BBNo Porter is just that – the Traditional version.  Brewed to a recipe dating back to the mid-19th century, recreating a staple of London’s beer culture at the time.

And a delicious treat it is.  It pours thick and black, with notes of chocolate, coffee, burned toast and a hint of smoke.

The flavour captures the lovely toasted and roasted malt, both milk and dark chocolate, those hints of coffee, raisins and other dark stone fruits and then this hint of grassy hops comes and goes.  Lovely jubbly! 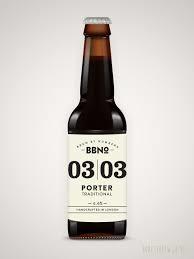