The Grimbergen label is one most visitors to Belgium will remember from their travels.  It is widely available, with a good showing in most supermarkets let alone bars.

Grimbergen is one of the many ‘abbey beers’ having ties to a Norbertine monastery that was built in 1128.  Over the centuries through times of war and unrest, the abbey was and rebuilt several times.  This gives rise to the phoenix motif, as well as the mantra which translates as ‘burned but not destroyed’.

Now owned by the Carlsburg Group, it is brewed in several European countries, with the Heineken Group maintaining rights to label in Belgium.

This beer is a classic Belgian Blonde Ale, with that very distinctive Belgian yeast aroma of banana, bubblegum, citrus and clove.  It carries through into the flavour which has an early sweetness of bready malt and citrus and other yellow fruits.

A fairly soft mouthfeel and overtly fruity body makes for an easy drinking beer.  Probably lacking some hop bitterness on the finish to balance out the sweetness and dry the finish somewhat. 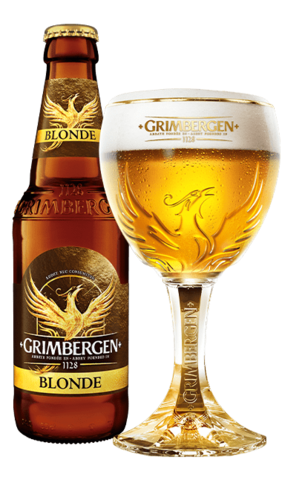