One of Belgium’s iconic styles is the white (wit) beer.  This Steenbrugge Wit is brewed with 40% unmalted wheat and 60% malted barley, with coriander, curacao orange peel and a mix of spices.

An inviting aroma of lemon peel, banana and light spices.  The beer light-bodied and dry, with a crisp wheat malt, tangy citrus and subtle spicing.

In 2011 this beer won ‘Best Spiced Wheat Beer’ and the World Beer Awards.

The Steenbrugge label was owned by the now-defunct De Gouden Boom brewery, formerly located in Brugse.   The name Gouden Boom translates as ‘golden tree; and is the symbol of the city of Brugse.

In 2003 the De Gouden Boom brewery was purchased by Palm Breweries, who then moved production out of Brugse and closed down the brewery.

Palm Breweries was itself the subject of a takeover last year when Dutch company Bavaria NV acquired a majority of its shares.

See all of the July 2017 monthly six pack 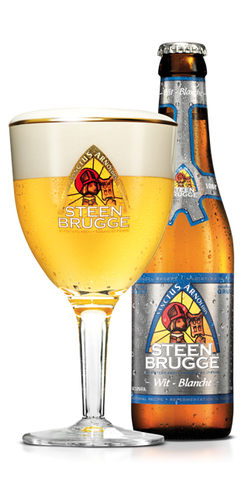