The boys from Struise are best known for their big bold dark ales, such as Pannepot or the Black Damnation series of 13% Russian Imperial Stouts.  But this is the beer from which it all began.

Back in 2001, brewing from their ostrich farm, the first beer they released as professional brewers was the Struise Witte.  It may seem a very ‘safe’ debut, but in typical Struise style it is a little bit different.

It looks like a normal witbier, and has the typical yeasty and citrusy aroma of a Belgian wit.

The beer is refreshing, though has a fuller body and a bigger hit of orange zest.  The hops also seem a little more pronounced, with an earthy minerality combining with the yeast for a dry, spicy finish. 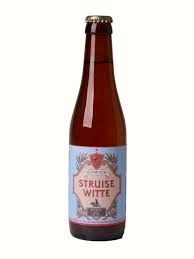