This beer completes the trio of Leffe Royale beers, bringing the total number of different Leffe beers to eleven.

For a brewery known for producing abbey type ales, it was an interesting decision to introduce a more hop-forward series.  Originally, the first beer (Leffe Royale Whitbread Golding) was to be called ‘Leffe IPA’.  There exists promotional materials showing images with this label, but they obviously thought better of that decision.  But we’ll still classify it as a Belgian IPA.

The Mapuche people are indigenous inhabitants of parts of Chile and Argentina, including parts of Patagonia.  The hop is named after these people, and is grown on the plains of Patagonia.  Leffe claim that the hops are grown exclusively for them.  I’d never heard of this hop before, so this may well be the case.

The Mapuche hops are said to have a ‘bouquet of blueberry, red fruits, peach and apricot’.  There is definitely a fruity aroma, with some tropical fruit flavours in the taste.  The beer is a golden copper colour with a sweet caramel malt body, and a sustained bitterness. 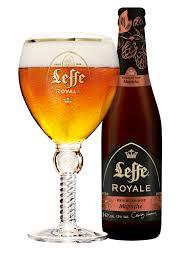