This is another Leffe beer from the global monster that is AB-Inbev; and even bigger following the purchase and slow merger with SAB Miller.  The headquarters and main brewery in Belgium occupies an entire block in the city of Leuven.  So not quite the artisinal, small producer we normally get our beers from.

But even the big guys are trying new things, and this is an example of an attempt to play in the same field as the small brewers.

The Royale is like a bigger, tastier (and classier) version of the Leffe Blond.  It was the original in an ever-expanding series of Leffe Royale beers, and this one features Whitbred Golding hops which are grown in the Poperinge region of Western Flanders.

Despite the hops being featured, this is a strong blond ale.  A sweet grainy malt backbone carries a little spicy bitterness.  The particular hop is said to add a touch of lemon and a slight resinous note.  It also plays on the yeast to exaggerate the banana and vanilla notes.

Look out for more Leffe Royale variants in the coming months. 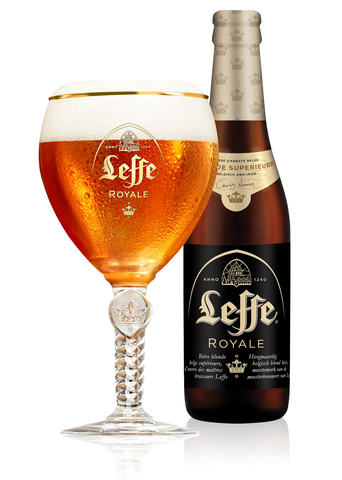