Maenhout is a small brewery originally started in 2009 by husband and wife team Birgit and Thijs.  Starting out with a small 500L brewing system, the popularity of their beers saw them move to larger premises in 2015.  You can find the new brewery in the town of Pittem, in West Flanders; which is south of Bruges and west of Ghent.

These young brewers create beers that are based on traditional Belgian styles, but with a more modern bent.  (The label art is also a little risqué and very un-Belgian!)

The Hoppa Hontas is our first example.  It is something between a Belgian Pale and a Blond, and has been brewed with several variants.  It has previously featured Amarillo and Sorachi Ace hops, and in late April 2018 they brewed for the first time the Equinox version.

It has quite a grainy malt body, supplying just a little early sweetness.  But this gives way quickly to an assertive bitterness; especially as the beer warms. A touch of citrus and and floral bitterness linger in the aftertaste.

See all of the September 2018 monthly six pack 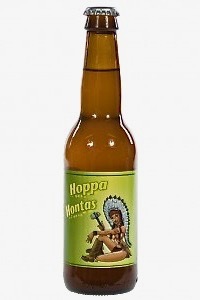