In Belgium, they refer to the makers of L’Arogante as a beer company, rather than a brewery.  As often happens, their story began with two friends chatting in a bar of their dreams of brewing commercially.

The first step was to start brewing small batches in each of their garages, before they made the decision to approach de ProefBrouwerij in Lochristi, just outside of Ghent.  This large scale production brewery is responsible for producing beers for many breweries throughout Europe, and even further afield.

Incidentally, the brewery name is a mix of the two home towns of the friends – La Roche-en-Ardenne (where the pub for the business meetings was located) and Ghent.  A clever play on words.

The beer is a hoppy blond ale, that combines a semi-sweet, fruity malt body with a very grassy, citrus hop-forward bitterness from the Magnum, Cascade and Amarillo hops.   It finishes quite dry with a little yeasty, prickly lingering hop bite.

This beer really changes as it warms, going from more bitter to releasing the sweetness of the malt body. 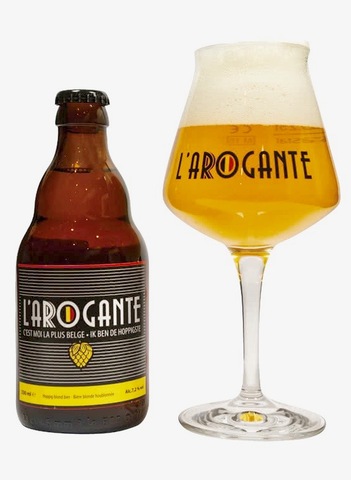