The beer pours a dark red to brown colour, with a beige foam that quickly sinks in on itself to leave the beer looking quite still.

The aroma is subdued, but exhibits a little sweet dark malt, raisins and plums, a hint of sour cherries and an earthiness.  The flavour picks up on these attributes, though more boldly.

A rich mix of sweet dark malts and the dark stone fruits makes for a tasty beginning.  There is a little hop bitterness to balance out and bite through the sweetness, though no more evident than that.

About the beer:  this is not a ‘bock’ beer at all, rather a top fermented ale.   The ‘bock’ is actually a reference to the buck, and ‘leute’ translates to ‘fun’, and takes on the meaning of ‘people’s beer’.  The first Leute beer was brewed in 1927 (the date reference on the barrel), but stopped shortly after.  The second incarnation arrived in 1997.  Oh, and it has a very cool glass! 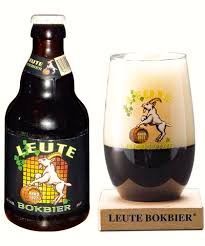