Belgian beer fans may well be familiar with the Adriaen Brouwer range of beers.  They are produced by Brouwerij Roman, who are reportedly the oldest still-operating brewery in Belgium.  They’ve been brewing since 1545!

This beer was based on the previous seasonal offering the Winter Wood, which we featured in our February 2019 pack.  This beer was aged on wood chips from whiskey barrels, but now the beer spends time in sherry or whiskey barrels and is then blended.It is basically the same Belgian strong dark ale at heart, though there is a little more roasted malt in the grain bill which gives it that darker brown colour.

Lots of sweet dark fruits, caramel malts, sherry and whiskey plus vanilla from the barrels are all present in the aroma.  The first taste is rich and smooth, belying the 10% ABV.

More flavours open up as the beer warms a little.  Caramel, brown sugar, dried figs, raisins, plums and cherries all present in the taste.  Underneath those flavours the sweet sherry (and to a lesser extent for me at least) and whiskey barrel notes add themselves.

This beer is now a part of the Roman core range, so you don’t have to wait all year for it to become available. 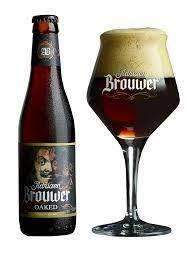