This beer was first brewed by Pierre Celis – famed for re-establishing the Belgian Witbier style with Hoegaarden - at his small brewery De Kluis which he opened back in 1966.   In the 1980’s he opened a new facility which was unfortunately destroyed by fire a few years after opening.

It was at this point the Belgian beer company Interbrew took over the brewery.  Interbrew would go on to become the global behemoth we now know as AB-InBev.

So for decades, this beer has been brewed at the massive ABI brewery in Leuven.  But it is proof that there are beers made by the multinationals that are very much worth drinking.

The ‘Forbidden Fruit’ has a wonderful balance of sweet ripe fruits, caramel malts, earthy hops and some gentle spices.  It has a very full, round and somewhat soft mouthfeel. From a sweet start the beer dries out nicely with a lingering prickly bitterness and just a hint of alcohol warmth. 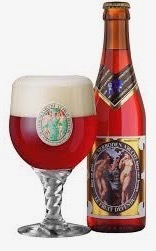