While holding to their Belgian traditions, but with a look to the current influences around the world, it was decided to create a barrel aged version of the Gulden Draak Quadrupel using whiskey barrels.

This version is the 2017 vintage of that same creation.

At the heart of the beer is the Belgian quad, with a rich fruity and malty body of dark dried fruits like prunes and raisins, caramel, toffee, some spices like clove, nutmeg and pepper and a hint of dessert wine.

The time in barrel adds a real whiskey hit, along with a strong note of vanilla and woody character.  The feel is quite soft for such a big beer with a drying finish and warm, lingering aftertaste.

You’d expect a decent beer for a dedication brew from a brewery such as Ven Steenberge, and I think this beer does not disappoint. 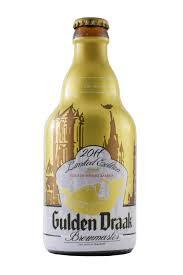