This is a relatively new beer that was added to the De Ranke portfolio a couple of years ago.  It was the first new edition they’d made for several years, so they don’t change up their offerings all that often.

It is no doubt a sign of the growing trend of lower alcohol, more sessionable beers – with flavour.

The beer was made in the fashion of an old style pilsner.  A refreshing Belgian style ale, unfiltered, unpasteurised and slightly cloudy.  It has a really grainy malt body.  There isn’t so much a sweetness to the initial taste, rather more a doughy character.

There is a good dose of old world hops, giving a grassy, floral and slightly spicy note.  As the beer progresses the hops really do assert themselves leading to a lingering bitter finish which is also quite dry.

I always enjoy when a Belgian brewery makes a beer based on older styles, and the common theme appears to be this dry, assertive bitterness; whether the style is a pilsner or a tripel.  Seems the Belgians have been fans of heavily hopped beers for quite some time.

See all of the April 2019 monthly six pack 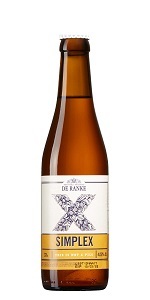