Verzet are a brewery who tend to do things their own way, which generally means against the norm.  So while Belgian brewers are becoming more enamored with American hops, Verzet have produced this beer in opposition.

I guess we’ll categorise Super NoAH as a Belgian Pale Ale, even though the brewery refer to it as a Belgian Blond.  For me it is too light in body for that, and is really a simple beer that uses Belgian hops (that is ‘No American Hops’) and is very easy drinking.

The light, grainy malt body really is just a platform to highlight the Belgian hop.  And the patriotic choice here is Hallertau Mittelfruh.

The hop gives an earthy and floral aroma, like a good old school English IPA.  The flavour is mostly floral, with a little sweetness from the malt body that quickly gives way to a solid bitterness that lingers nicely in the finish. 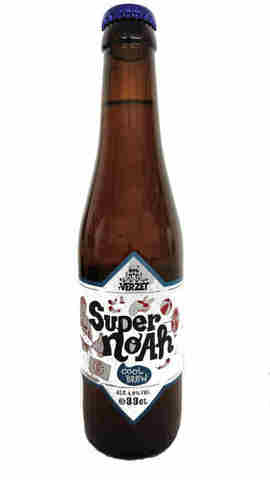