The two friends who started the De Ranke brewery as a weekend hobby using borrowed time on an established brewery’s system, have progressed to setting up their own small brewery in the town of Wevelgem.

They quickly became known for using more hops than normal in all their beers, so it seems appropriate that XX Bitter is reputedly the hoppiest of all Belgian beers.

It pours a golden yellow, with a thick white head.  The aroma is of Belgian yeast, as well as grassy floral hops.

These attributes carry through in the taste.  There is a definite malt backbone to support the hop bitterness.  Add to this a wonderfully intriguing Brettanomyces yeast character with a lovely dry finish. 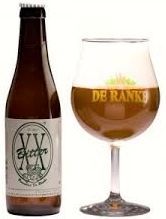 A tasty saison that was elected world's best in 2017!