Brasserie Dubission is the oldest brewery still operating in Wallonia, celebrating its 250thbirthday this year.  And in 2000 they partnered with a restauranteur to create the little brew pub Microbrewery Brasse-Temps in the university town of Mons.

The first beer produced there was Cuvee des Trolls.  The intention was to provide the young student population with a sessionable beer that bridged the gap between the commercial Eurp plisners and lagers and the range of specialty Belgian beers.

So this is actually a lager, though the sessionability is surely compromised by the 7% ABV.  Regardless it was an instant success, and is now part of the core range of Dubuisson.

Unfiltered, it is a slightly cloudy yellow straw colour, with an aroma of citrus and Belgian yeast.  Dried orange peel is added to the boil to accentuate the citrus flavours. They combine with a fairly crisp malt body and a grassy, herbal hop character.

It has fairly high carbonation, which makes for a light and crisp, easy drinking beer which belies that solid ABV.

See all of the September 2019 monthly six pack 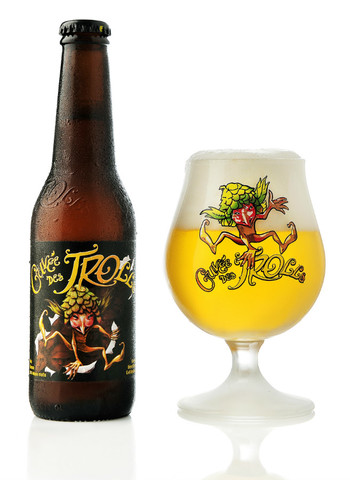