Brasserie De La Senne are the ‘other’ Brussels brewery – Cantillon being the most well-known of course.

The two brewers behind De La Senne are proud Brussels natives, and equally proud of Belgium’s rich brewing tradition.  They produce beers that are traditionally Belgian by nature, though sometimes borrowing influences from different brewing cultures when it fits.

The beers are generally lower in alcohol than most of the Belgian beers we see.  And all their beers are heavily hopped.

Stouterik is ‘The Brussels Stout’.  Roasted malt and unmalted roasted barley create a dark body.  There is a little dried fruit sweetness early on, giving way to a roasty, chocolate malt body with a hint of roasted nuts.

The beer is very dry, in the style of an Irish Dry Stout.  And of course there is a strong hop presence for a strong bitterness.  For such a low ABV beer, there is a lot of complexity and loads of flavour to enjoy.

See all of the January 2016 monthly six pack 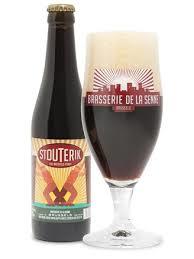