It seems funny to write about a ‘new brewery’ when it has been around for some 12 years or more.  And that is the case for ‘t Hofbrouwerijke, as we welcome their beers to our beer packs for the first time.

The story of a home brewer whose first attempt at homebrewing was far from successful.  So much so that he took a 15-year hiatus from brewing before finding the inspiration to try again.  After honing his skills at a nearby brewing guild, Jef set up his own small brewery much closer by – right next door to his home!  Hence the name ‘t Hofbrouwerijke which can translate as ‘garden brewery’.

Hofblues is a Belgian stout, weighing in at a moderate 5.5% ABV.  It pours a very dark brown to black colour, and my bottle was a little lively needing a rest in between pours to get it all in the glass.

Aroma is of chocolate and a little coffee, which kind of reverses in the flavour.  Initially a little sweet, the taste is much more that of very dark chocolate, roasted malts and coffee.  Medium bodied with a dry, somewhat bitter finish with a hint of dark fruits lingering in the background.

It is quite an easy beer to drink, the roasted bitterness softening with each sip to become something that you could easily enjoy a few of. 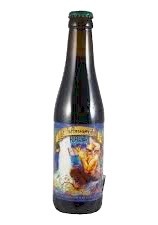