Inspired by the Babylone beer from Brussels Beer Project, the innovative and experimental Kaapse Brouwers also turned their hand to producing a beer from unsold bread.

Collaborating with the nearby Jordy’s Bakery.  This beer replaces 30% of the malt bill with unsold sourdough bread from the bakery.  In all 270 kilos of bread was used to produce a 5,000 litre batch of beer. The beer was released last year at the annual Beer Festival of the Cape Brewers.

With the growing number of bread beers being produced, we may need to create a specialty category, but for now we’ll nominally class this beer as a Belgian Style Strong Blonde Ale.

It pours pretty still, and is a good bit darker than a blonde ale.  Naturally it has quite a grainy malt body, though with some extra sweetness in there making the body a little heavier.   Slightly fruity and with a little spice, it finishes with a moderate bitterness and a little sticky sweetness.  An interesting experiment! 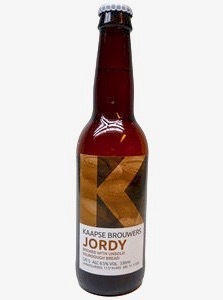