Another new, small Belgian brewery to add to our sampling list.  In 2008, brewer Peter Van der Borght was joined by three friends, and they formed the Lupus Brewery.  The name was later changed to Wolf Brewery.

Starting with borrowed time at other breweries, they soon moved into their own premises with their own equipment; complete with tasting room and café.  Though they still brew some of their beers in the nearby Het Anker brewery (which is famed for the Gouden Carolus range of beers).

The Carte Blanche is one of the newest addition to their range, introduced in 2014, and it was our favourite.

It has a lovely full malt body, sweet up front with both fruit and grain.  The spicy yeast character then kicks in, along with a good hop bitterness from the five different hops used in this beer.

Really interesting, and a little unexpected – the flavours seems to complete on the tongue, without any one aspect winning out in full.  It took a couple of tastes to get used to this one, but it was intriguing.  Medium-high carbonation adds to the sensation, with a dry bitter finish. 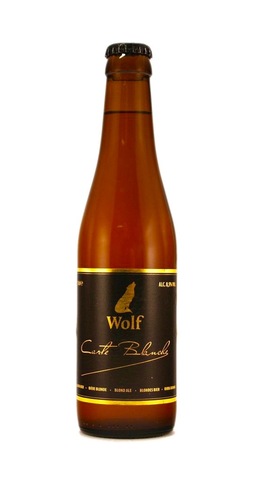